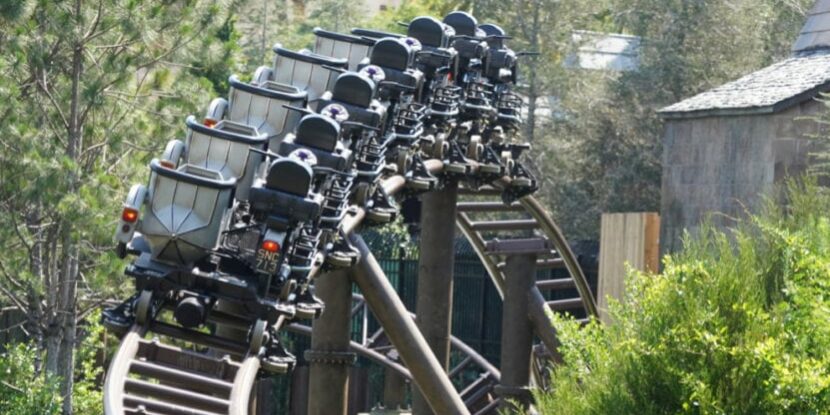 Did you know that E.T. is the only original ride left at Universal Orlando? It’s been introducing new and exciting rides such as Hagrid’s Magical Creatures Motorbike Adventure. But what can you expect on this ride the next time you head to Universal?

From waiting times to the joy and excitement of this ride, there’s so much to unpack. Be prepared for your next magical adventure, and read on to discover what to expect on your next trip.

Did you know that Orlando is home to more than 100 lakes? When you’re not checking out rides, head to Lake Eola. It’s a giant sinkhole with the deepest point being 80 feet.

When heading to Hagrid’s Magical Creatures Motorbike Adventure, the queue is worth the trip, even if you’re not looking to go on the ride. First, you’ll see Hagrid’s hut. It’s very similar to his home in the movie as well!

Next, you’ll find the ruins on the outskirts of Hogwarts Castle. Check out the statues of Merpeople; it’s a dedication to the Triwizard Tournament at Hogwarts.

Look up inside the building. Creature cages hang above, and some of them are moving. Watch the preshow movie and then head into Hagrid’s workshops.

Did you know that Hagrid is 11 feet 6 inches tall in the books? Filming would have been much more difficult if he had been depicted at this height. To make it easier, he’s only slightly taller than the average wizard.

In the preshow, Arthur Weasley and Hagrid are in it. They’ll discuss what to expect in your upcoming class.

Next, you’ll prep the motorbike for your adventure. You’ll be sprinkled on during this preshow.

Pay Attention to the Moving Walkway

Line up on the left or right side of the line. The left rides in the sidecar while the right gets the motorbike.

There’s only a difference between height and separation for each side. Next, you’ll head to the platform next to the motorbikes. You’ll have time to board before they take off.

For Those Who Don’t Want To Ride It

There’s a family room to hang out in while others are on the ride. It’s to the right of the final queue. There’s a television that plays Harry Potter movies to keep you busy.

There’s a drop where the cart feels like it’s freefalling. You’ll feel like you’re entangled in the Devil’s Snare plants.

The drop is at about the second leg of the ride. You’ll ride quickly backward.

It’s a 17-foot vertical drop. Items will fly by, making you feel like you’re about to crash.

The Size Doesn’t Work for All

While Hagrid’s Magical Creatures Motorbike Adventure unique design and ride are fun for many, it might not be suitable for all. The safety latch is similar to lap bars on roller coasters. The latch might not go down to the required level to engage.

The sidecar might be a better option in this respect. Speak with a ride attendant before waiting in line if you’re unsure.

Spells release the plant’s grip before you fall 17 feet to safety. Keep in mind that it’s a more intense roller coaster and not right for everyone. It’s one of the most unique rollercoasters in Orlando.

While the ride is only a few minutes (like most rides), it’s one of the longest roller coasters. You’ll also get to fly over thousands of newly planted trees.

Fly high at more than 70-degree angles before the drop. The ride can go at least 50 mph.

About the Ride’s Story

Behind Hagrid’s hut there are mysterious ruins. The Care of Magical Creatures class begins when you meet Hagrid, Arthur Weasley, and Fang (Hagrid’s dog).

Special effects bring Fang to life in a preshow experience. The magical motorbikes are identical to Hagrid’s in the movies.

Explore mysterious ruins, fly above the trees, and go backward and forward. See the rarest magical creature during the ride.

The blast-ended skrewts will be there. They aren’t in the Harry Potter films, so you’ll experience them first!

Blast-ended skrewts are lobster-like creatures that are eight feet long. Their tails are about ten feet long with stingers.

Next are cornish pixies. You might remember them from the Defense Against the Dark Arts class in Harry Potter and the Chamber of Secrets.

Don’t forget about Fluffy the Three-Headed Dog. You’ll find him in the first movie, Harry Pottery and the Sorcerer’s Stone. Play music, and they’ll fall asleep.

Lastly, the devil’s snare makes an appearance. You might remember it from the Philosopher’s Stone.

Relax and remember the spell to break loose from its snare. Just don’t try spells on Hagrid since many don’t work. He’s resistant to dark magic and numerous stunning spells.

For Hagrid’s Magical Creatures Motorbike Adventure extended downtimes, you might need to wait longer than an hour. Select ride vehicles have wheelchair transfers available. Sidecar seats slide toward you for easy transfer.

If you have a waistline larger than 40 inches, use the test seat before waiting in line. You might be able to ride the motorcycle but not within the sidecar seat.

Those with larger body frames or tall guests might need to ride in the motorbike. You must be at least 48 inches tall to experience this ride.

Tips for the Best Experience

Early arrival will mean you’ll be one of the first on the ride. Check for ride issues since it might not open during this.

Riding in the late afternoon is another good time. Right before the queue reaches capacity is usually one of the lowest wait times. If the virtual line is being used, this might not be an option.

The Universal Virtual Queue is available to shorten wait times for popular attractions. However, it’ll only be available during the peak times of the year.

Enjoy no wait time for the attraction with this feature. Instead, you’ll be free to enjoy Universal Studios’ other features while you wait.

To use the Universal Virtual Queue, you’ll need the Universal Orlando app. First, check it to see if there’s a virtual line available.

Choose an available time slot and how many are in your party. Next, you’ll have a QR code or confirmation screen.

After the ride, pick up some collectible merchandise. This can include phone covers, keychains, socks, pins, and posters. Then, head to the Islands of Adventure at Universal Orlando for some merchandise.

What To Expect on Hagrid’s Magical Creatures Motorbike Adventure

After exploring this guide on Hagrid’s Magical Creatures Motorbike Adventure, you should better understand what to expect. Next, read up on the various rides at Universal that you won’t want to miss!

Are you ready to plan your next trip to Universal but don’t want to pay an arm and a leg? Then contact us for the latest deals. Sign up for our free newsletter to stay up-to-date on different specials going on!

Dockside Inn and Suites: The Differences Between Surfside and Dockside
November 1, 2022

A Complete Guide to the Jurassic World VelociCoaster
September 1, 2022