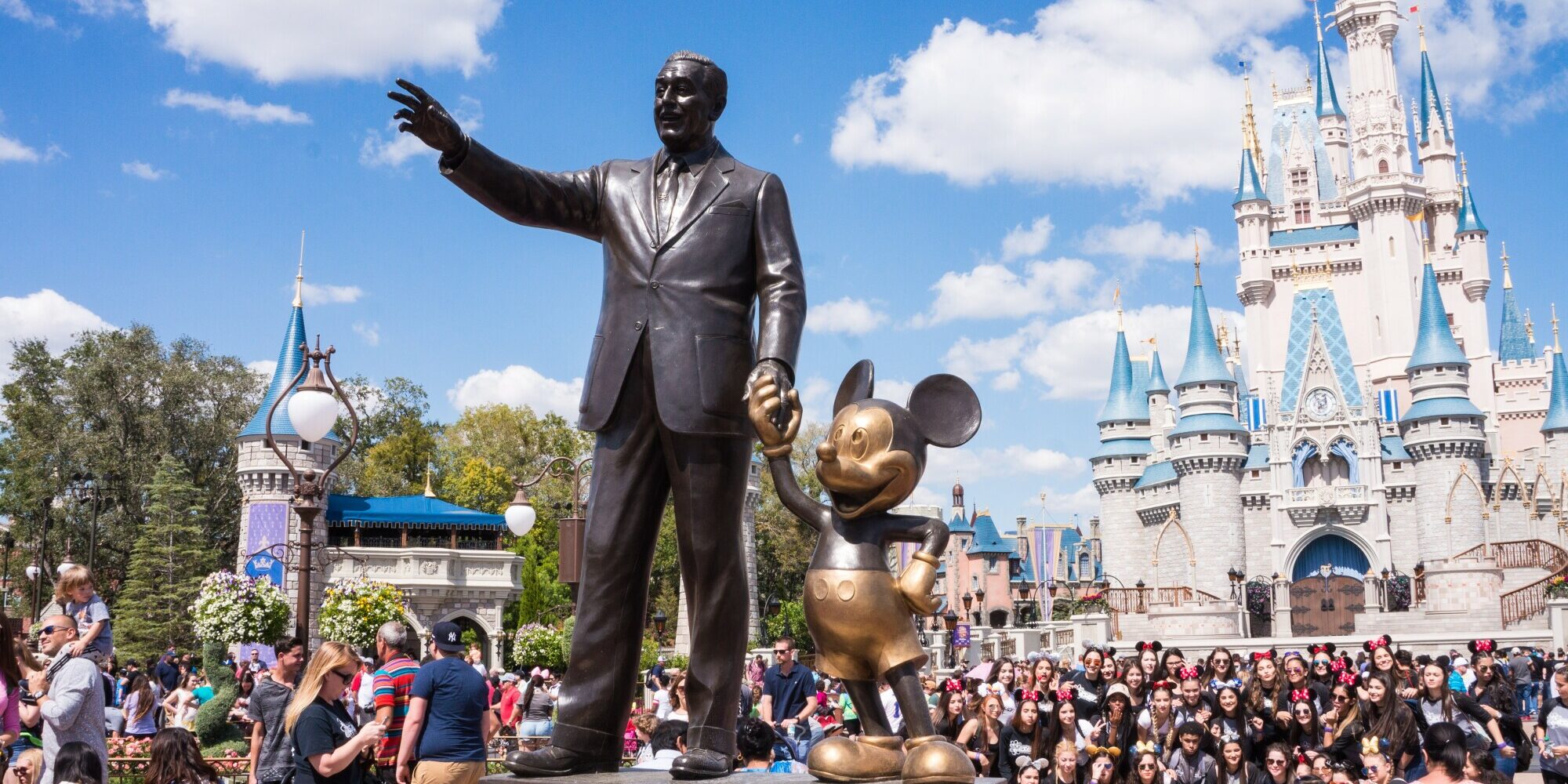 Once upon a time, Disney World was nothing but a large expanse of barren land and occasional orange groves. It was created by the vision of Walt Disney, and after Walt’s death, Disney World was overseen by his brother Roy.

Do you know how Disney World became the world’s biggest theme park?

Now encompassing four parks, Disney World has to be experienced to be believed. Read on as we answer the question “How big is Disney World in Orlando, Florida?”

How Big Is Disney World In Orlando, Florida

Disney World is comprised of four main areas. On top of these main theme parks, there are also two water parks, twenty-five hotels, and four golf courses. Collectively, this is known as Walt Disney World Resort.

Walt Disney World covers an area of 27,000 acres. This makes it the largest theme park in the world. Its four main areas are below.

The Magic Kingdom is the center of any trip to Disney World. Here you will find attractions based on Disney’s illustrious history. From Buzz Lightyear’s Space Ranger Spin to the fabled Space Mountain, you can take in the rides while meeting some of the characters that have made the company famous.

At the middle of all of this is Cinderella’s Castle, used as the logo for the company. With so much to see, you could spend a week here and still not experience everything.

Epcot was the second of the parks to be added to the resort, a vision set in motion by Walt Disney himself. Its aim is to showcase all the great achievements of the human race. These can be through science and innovation or the arts.

As such, Epcot is a real smorgasbord of things to do and see. You can venture through different worlds, sampling world cuisine. The next moment you can be under the seas or designing a high-speed racing car.

The Animal Kingdom takes its inspiration from the natural world around us. Part zoo, part safari and part theme park, you can see some of the most exotic animals from around the globe. All of this is done with conservation at its heart.

Tigers, gorillas, and lions can be spotted at various locales. You can venture even further back in time and rescue dinosaurs in prehistoric races. Even fantasy excursions can take place, sending you to the world of the movie Avatar for rides and themed cuisine.

The Hollywood Studios section of the park is exactly what you would expect: a celebration of movies and cinema in a working studio. You can see live shows like the Frozen singalong celebration or indulge in Toy Story with themed arcade rides and rollercoasters.

Due to Disney’s acquisition of Star Wars, it is now the home of cinema’s most beloved sci-fi franchise. You can build your own droid or wander through the Millennium Falcon’s decks. A huge two-day immersive adventure is also currently in production.

How Many Visitors Make a Trip to Disney World Each Year?

When the park opened in 1971, only one of the parks existed. This was the Magic Kingdom. Extra parks have slowly been added over its 50-year history.

The Magic Kingdom holds the record of being the busiest theme park in the world. A sizable 20 million visitors per year were arriving before the pandemic. As tourism returns and with new attractions planned, this should soon get back to its normal levels.

Animal Kingdom gets around 14 million visits a year. Epcot comes just behind this with around 12.5 million visitors. Hollywood Studios has just over 11 million.

How Big Is the Disney Castle?

Cinderella’s Castle, the heart of Disney, stands 189 feet tall in the center of the park. With its 27 spires, it was actually designed to look much bigger than it is, so many people may be surprised at its height when they see it in real life.

Inside the castle, you can find a restaurant and boutique. One of the park’s top secrets is that it houses a hidden suite opened only for special guests.

Is Disney World or Disneyland Bigger?

Disneyland has its home in California. Packed with great attractions, it is about to get even better with the addition of a Marvel Avengers Campus. Disneyland has two different parks.

Although equally as impressive, Disneyland covers 500 acres in comparison to Disney World’s 27,000. There are 53 attractions and 49 rides at Disneyland. Disney World has more than 130 attractions with more added every year.

How Many Characters Can You Meet at Disney World?

As more movies get released, even more characters join the roster of Disney alumni you can meet in the parks. At the moment, estimations are that around 74,000 costumed characters exist across all four parks. These are a mix of new additions and old favorites.

No buildings in the park are bigger than 200 feet. This would require them to have flash lighting for aircraft, ruining the illusion. The Tower of Terror and Expedition Everest both stop at 199 feet.

A secret network of tunnels exists below the park, allowing workers and emergency services to travel around in a color-coded system. Another tunnel network is specially built to remove trash from the park in an automated vacuum system.

Any US flags you see in the park are not technically real US flags. As genuine ones have to follow the national flag code, they would have to be raised and lowered according to the law. By removing a star or stripe, the park can keep the flag flying whenever they wish.

Planning a Trip to Disney World

Now that you can answer the question “How big is Disney World Orlando, Florida?”, it is time to book your trip! Set your budget and plan what you want to see, as you may struggle to fit it all in.

Your first step should be FunParkGo. We can help you plan the trip of a lifetime in the Magic Kingdoms and surrounding parks. Click here to see everything you need to know about booking your next trip.

Places to Stay at Disney World: The Ultimate Guide
August 15, 2022